The City of Burgin is disputing the sewer bill. And the city’s sewer system isn’t even running yet.

At issue is how much money the city stands to collect from the sewer bills once the system is up and running.

Burgin expects to receive 10-percent of the proceeds in exchange for handling billing, while the sanitation district will keep the rest to operate and maintain the system and repay  $10 million in USDA loans.

“I take full offense to that,” Sanford said.

He objected especially to Hensley’s suggestion that the district had backed out of a deal with the city. 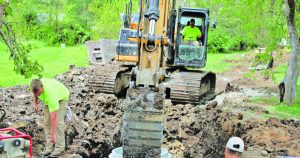 A Grant’s Excavating crew installs sewer lines in front of the Burgin Baptist Church on Thursday.