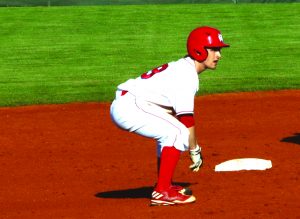 The Titan baseball team is having their best stretch of the season, ending this week with four wins out of five games. Coach Adam Shartzer looked for his team to make a jump now that the season is officially in full gear, and they have taken on the challenge. Here is a recap of the Titan’s game this week.

Junior Hunter Armstrong had his best outing of the season and one could argue this was the best pitching performance for the Titans this year, defeating Adair County (1-9) with a final score of 10-0 on Saturday April 8, the second game of the day for the Titans.

Senior Mason Hazelwood tossed five innings, gave up two hits, walked four and struck out seven but earned a no decision in the Titans 2-1 over Southwestern (6-1) on Friday, April 7.

Junior Hunter Kelly earned the win late in the game, relieving Hazelwood, as the Titans scored the game-winning run in the bottom of the sixth inning off the bat of Robinson driving in junior Joe Stoeckinger to win the game.

The Sophomore Barnett turns in another impressive outing as the Titans beat nearby Danville (7-4) with a final score of 12-2. Barnett went five innings, giving up one run, four hits and six strikeouts on the evening on the second game of the day for the Titans.

It was a much-needed win for the Titans and Tanner Robins, as he returned from injury to throw three innings, giving up three runs and striking out three to defeat Rockcastle County 15-5.

For full story, pick up this week’s copy of The Harrodsburg Herald.