Concrete has been poured and work is underway for the Kendyl and Friends Playground at Anderson-Dean Community Park. At their monthly board meeting on Monday, April 10, park board member Crimson Claycomb gave an update on the progress of the playground.

Due to scheduling conflicts, the date of the build is still up in the air. Claycomb said she expects construction to begin in early May.

Claycomb said a key piece the playground, the wheelchair accessible merry-go-round, was back-ordered and the date for delivery has been continuously delayed. “I was told the last week of February, I was told the first week of March and I was told April 1 and then April 24 and I lost it,” Claycomb said.

After discussions with the manufacturer, the group is able to get the piece of equipment that is on display. “It’s in a glass case, you can’t touch it, you can’t get on it, it is just there for looks,” Claycomb said. She said she has a letter from the manufacturer, Korkat, ensuring the equipment is up to code. “It is on a truck and on its way home. Kevin Burdine went down to pick it up.”

McKenzie Concrete of Morehead submitted a bid for $7,900, which includes the cost of wiremesh to complete the project. They asked for a minimum of seven days to make sure he concrete dries. 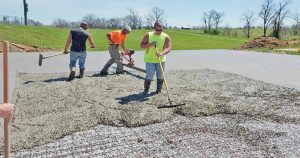 Crews from McKenzie Concrete out of Morehead help to smooth out concrete at the future site of Kendyl and Friends Playground.