People looking forward to getting out on the Herrington Lake should know the lake is considered safe for swimming, fishing and drinking, state officials say.

However they should also know that Kentucky Utilities has been ordered to pay $25,000 in civil penalties for discharging pollution into the lake including selenium, which has been linked to birth defects in fish.

In January, the Kentucky Division of Water, which is part of the Energy and Environment Cabinet’s Department For Environmental Protection, charged the E.W. Brown Generating Station in Burgin with having “directly or indirectly discharged, or caused or permitted to be discharged, a pollutant or substance that has caused or contributed to pollution of a water.”

In high concentrations, selenium from mining, agriculture and industrial operations can damage respiratory systems and cause birth defects as well as sterility in fish.

However there is no scientific consensus about  selenium’s effect on humans. A small amount in the diet is considered benign and perhaps beneficial. Selenium supplements are widely available and tout benefits including preventing coronary heart disease. According to the WebMD website, anything above 400 micrograms a day in adults is considered an overdose.

Experts believe the selenium is leaching into the lake from the ash retention pond at E.W. Brown. In 2014, regulators found toxic chemicals were leaching into Herrington Lake via underground springs. Water tests  showed arsenic levels 98 times the maximum allowable level, as well as elevated levels of iron and manganese. 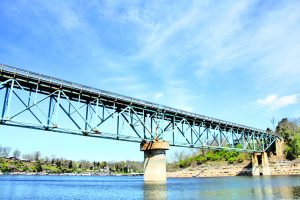