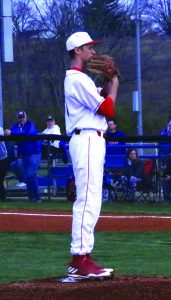 The week didn’t start off as planned for Coach Adam Shartzer and his Titan baseball team, but most of the time it is how you finish and the Titans finished winning their last two games of the week. Here is a recap of the games.

Sophomore Josh Barnett had one of his best outings of the season, but came up short in an extra-inning affair. The Titans lost to the (3-1) Lexington Catholic Knights 3-1 on Thursday, March 23.

Senior and UK baseball commit Mason Hazelwood earned the win for the Titans, going six innings, giving up a run, three hits, walking one and striking out three. It was an impressive win for the southpaw and he earned his team a win they really needed.

The second game of the day for the Titans saw them win their second in a row in convincing fashion 18-7 against Rowan County (3-3).

The Titans scored an amazing 13 runs in the bottom of the sixth inning to come back and win the game in the final inning. Mercer trailed by two runs heading into the bottom of the sixth and that is when clutch at bats took over. Hazelwood was the star of the day driving in five runs during the evening game and also driving in the go-ahead run in the sixth, going 3-for-5. Hazelwood batted twice in the inning, with his second at-bat being a grand slam to pull away from the Vikings.