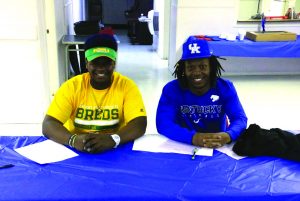 Growing up and playing sports together can be said by many in the Mercer County area, but not many can say they both signed their letter of intents to continue their college careers, together. In the case of Tyus Short and D Smith, that’s exactly what they did. In front of family, friends and teammates, Short and Smith both made it official on Friday, March 24.

Short, son of Orlando and Yolanda Mays, lettered in football and track, made his college choice a few months ago but officially signed with Kentucky State University to continue his football career. “First of all I just want to thank God for the opportunity and the ability to play the game that I love,” said Short. “I want to thank all the wonderful people  that have surrounded me and supported me throughout this whole process.”

D Smith, the son of Donald Wayne and Colette Smith, had his college choices down to two very familiar schools. The University of Kentucky and the University of Louisville. With a Wildcat and Cardinal hat placed side-by-side on a table, Smith ultimately picked the Wildcats to walk-on the team and live out his dream of playing football on the collegiate level.

Smith wasn’t always the biggest person on the field or court growing up, but he said it helped him work harder knowing he didn’t have the height that others had. “I think being small is one of the biggest blessings God has given me,” said Smith. “It made me work harder in school to get to where I wanted too. I’m blessed that God has put me down this road.”