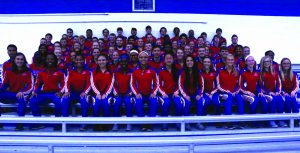 Trying to defend a championship in any sport, at any level, proves to be one of the most challenging feats in sports. The Mercer County Track and Field team, coming off an overall team state championship, looks to hoist that trophy again in 2017 as they prepare for the upcoming season.

Head Coach Terry Yeast talked about last year’s team and what it’s like winning a state championship. “It was super humbling and you know when you get into coaching your goal is to always win, I mean you want to be the best,” said Yeast. “Not everybody gets that opportunity and so when it really does happen, and it being that first one, it’s a pretty special feeling.”

Assistant coach Lynn Flach talked about how special this team was last season.  “To see how the kids bought into our program, work ethic and philosophies that we all believed in,” said Flach, “and to see the kids buy into that and do it, was very powerful. To accomplish what they did in a one-year time frame was unbelievable.”

This season, with returning individual champions, Coach Yeast and the Titans look to make more noise, but knows they are a team to beat around the state in 2017.