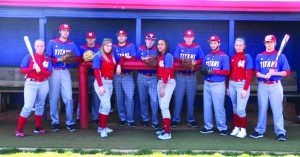 New coaches seem to be the theme in the area as Mercer County Titan baseball coach, Adam Shartzer, is in his first year as a head coach for the Titans.

Shope guided the Titans to three straight state tournament appearances from 2011-2013, coming up just short in the state championship game in 2011 against Central Hardin.

Shartzer knows the tough schedule the Titans have this season can gear them up for a postseason run.

“It’s West Jessamine’s region to lose. They have owned it for the last two years,” said Shartzer, “and East Jessamine knocked us out in the first round of the district tournament last year so those two games are definitely ones that we are keeping our eye on.”

The Titans will also play Ballard, from Louisville, who have a prospect  in Jordan Adell that is expected to be drafted in the MLB draft this upcoming season.

After ending their season in the first round of the district tournament last season, Head Coach Robbie Tharp’s Lady Titans look to take that next step in 2017 with senior leaders and a group of young talent on the roster.

Tharp has coached  the Lady Titans since the 2014 season, but has been around all levels of coaching in Mercer County starting in youth leagues and at the middle school.

“It was just one of those things where there was a great opportunity to become a head coach here,” said Tharp, “and I was a guy the school could trust and I was fortunate to be in this position.”

Tharp said there were a handful of players, fans and students should keep an eye out for this season.

“We will have two pitchers this year and we will showcase both of them,” said Tharp. “They are both freshman and are really talented.”

For the full story, pick up your copy of this week’s Harrodsburg Herald.