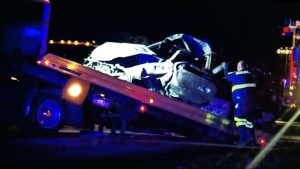 Two Harrodsburg Police officers freed an injured driver from a burning car  just moments before it exploded, authorities say. The single-vehicle crash happened around 2:15 a.m. Monday, March 20, on US-127 between Harrodsburg and Salvisa.

Patrolmen T.J. Wren and Andrew Lay were the first on the scene. They found the car on fire and the driver, conscious but with life-threatening injuries, trapped inside.

Wren and Lay cut the driver’s seat belt and pulled the driver from the car moments before it exploded, said Capt. Brian Allen of the Harrodsburg Police Department. Allen said the heat was so great it melted one of the policemen’s radios, rendering it inoperable.

Both policemen were uninjured and are back on duty, Allen said. The unidentified driver was flown to a hospital in Louisville for treatment, said Capt. Scott Elder of the Mercer County Sheriff’s Office. While the Harrodsburg officers were first on the scene, the sheriff’s office is handling the investigation.

The driver was the only one in the vehicle, Elder said. The cause of the crash is still under investigation, he said.

For the full story, pick up your copy of this week’s Harrodsburg Herald.