Burgin has been branching out athletically, adding a bass fishing team a few years back, a trapshooting team earlier this year, and now a rugby club.

Paul Brooks, an English language arts teacher in the middle school, went before the Burgin Board of Education last week to start a club. Brooks, an Englishman who has taught and coached rugby at both the college and high school level, said several students had approached him about starting a club at Burgin.

Much like the trapshooting team, the rugby club will be open to Burgin students but will not be school supported. Brooks said traditionally, rugby clubs are either self-funding or sponsored. He said he had paid the $160 registration fee to US Rugby, the national governing body for rugby in the United States. Included with the registration fee was catastrophic/liability insurance. The families of the individual players would pay $25. 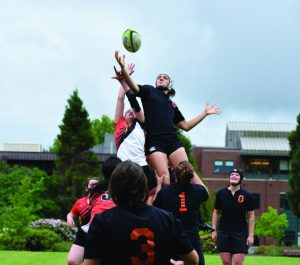 A rugby lineout being conducted. A group from either team lifts a player to fight and catch the ball for their team. Photo Credit: Milleal2