It remains to be seen if a law inspired by the Borell case will make it to the governor’s desk by the end of the legislative session.

House Bill 200 would allow courts to order persons convicted of equine cruelty to pay restitution for the horses’ care. The law would also terminate the convicted individual’s ownership interest in the horses involved.

The legislative session is winding down, but Sen. Tom Buford hopes HB200, which has already passed the house and is currently being read by leaders of the senate agriculture committee, can be brought to a vote in the senate.

“I am trying to bring the bill to the senate floor for a vote,” said Buford.  “Taxpayers get handed the bill when one chooses to  mistreat their animals until someone must step in and take possession. It is only fair to ask the owner to be responsible for the debt that arises from the care and medical needs of those animals.”

HB200 was inspired by the case of 43 severely neglected horses found in Mercer County last year. The horses belonged to Charles Borell, a labor arbitrator from Syracuse, New York, and his daughter, Maria Borell, who had trained a Breeders’ Cup winner in 2015. They were both charged with 43 counts of 2nd-degree animal cruelty.

In the end, Charles Borell pleaded guilty to nine counts and surrendered ownership of the horses. There is still a warrant out for Maria Borell. 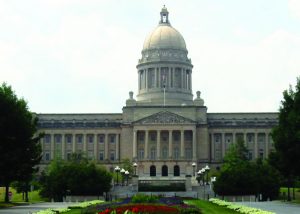 State lawmakers are considering a proposed bill that would take neglected horses away from their owners and allow counties to seek restitution. Public domain image.