“Into the Woods,” the spring musical for Mercer County Senior High School, is sure to be a crowd pleaser. “There is a little bit of something for everyone,” said Delaney Cracey, who plays Cinderella.

The production, which features words and music by Stephen Sondheim and a book by James Lapine, has been a Broadway hit as well as a big screen movie featuring Anna Kendrick, Chris Pine and Meryl Streep. The musical features characters from numerous fairy tales such as Rapunzel, Little Red Riding Hood, Cinderella and Jack and the Beanstalk.

“They are all after one thing in particular and the story lines all mesh together,” said Destiny Walker, who plays the grandmother of Little Red Riding Hood.

Michelle Hassall, director of the play and the choir director at MCSHS, chose the play to showcase the cast’s skills.

“The cast is incredible. This is a large show that features many of the fairy tale characters with which everyone grew up,” Hassall said. “I have an amazing group of kids who are wildly talented. I wanted them to have an opportunity to grow as both performers and musicians.” 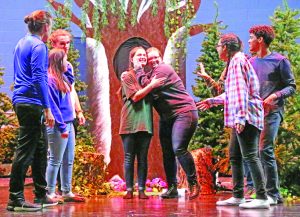 The cast of “Into the Woods” have been rehearsing since January. 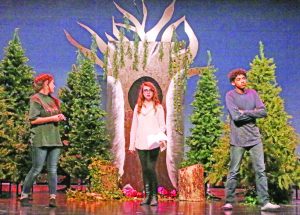 Delaney Cracey, Caitlin Gioffre and Sebastian Dunn rehearse a scene from the upcoming show, “Into the Woods.”