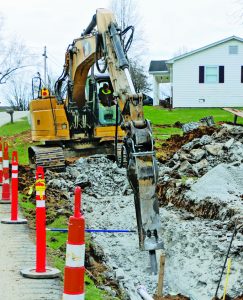 A crew from Grant’s Excavating of Richmond work on the sewer line that will run along Curdsville Road in Burgin.

Some citizens on the north side of Burgin could begin tapping onto the city’s new sewer system within the next month or so, said Mike Sanford, general manager of the Mercer County Sanitation District.

Sanford recently gave The Harrodsburg Herald a progress report on Burgin’s sewer system. He said testing on the 12-inch force main, which will transport sewage to the Danville Treatment Plant, could begin as early as this week.

At the pump stations, he said they were waiting on wiring and utilities as well as cleanup and restoration.

As for the 25,000-foot gravity sewer main on South Main Street, Sanford said contractors were beginning to go into the street.

Once construction is finished, the city will receive more than 3.5 miles of new roads.