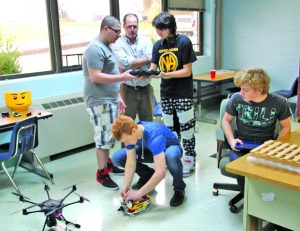 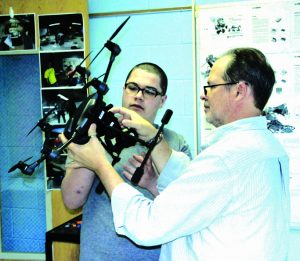 Kiper, a student in Mercer County’s Day Treatment Program, was frustrated. The class has recently received a drone but their first test flight was rained out.

So he and his fellow students in day treatment had the drone on the floor and were getting used to the controls.

“This is a nice camera,” said Noah Peyton. He was on his knees, examining the drone closely.

Other students were assembling robots which navigate obstacle courses. One student grew frustrated with his project. He did a handstand, appeared to count to ten, and then went back to work.

“They don’t like to sit at a desk,” said David M. Sullivan. “We try to do a lot of hands-on things.”

Sullivan is the teacher in charge of the 15 students currently enrolled in day treatment. His job title is “collaborative teacher.”

“Sometimes I feel more like a den father than a teacher,” Sullivan said.

Day Treatment is operated by the Mercer County School District in cooperation with the Department of Juvenile Justice. The students are male and female children ages 12 through 18 “who have demonstrated an inability to function in a public school setting due to behavioral or academic difficulties.”

That’s what it says on the school’s website, anyway. It’s really a second chance. For many of the students, it’s the only chance they’ve ever been given.

They have a lot working against them, said Chris Souder, principal of the day treatment program. They’re kids facing challenges most adults find daunting: poverty, legal problems, homelessness, substance abuse, sometimes their own families are dragging them down. Most of them have been sent to day treatment by the court system.

“It’s an opportunity for them to get back on track,”  Souder said.