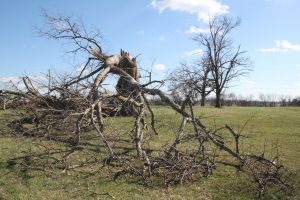 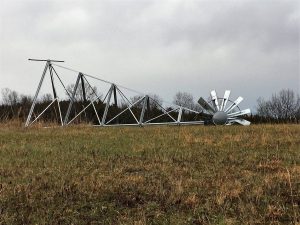 Wednesday’s high winds knocked down a windmill on Rick Rowlette’s farm. Rowlette said the storm was Asked to describe storm, he said, “Not a tornado but real close to it!” 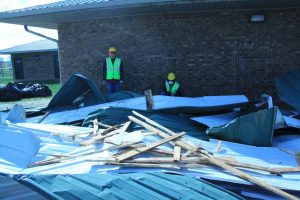 Workers from Belfor Property Restoration take a break beside what’s left of the Lions Shelter roof at Anderson-Dean Community Park.

March came in like a lion this year. On Wednesday, March 1, a series of storms with tornado-like winds roared through Kentucky, causing damage across the commonwealth and here in Mercer County.

According to Kentucky Utilities Company and Louisville Gas and Electric Company (KU),  82,000 customers across Kentucky—less than 1,000 of them in Mercer County—lost their power.

The storm system swept across the commonwealth spawning severe thunder storms and heavy rains, but the majority of the damage was caused by the high winds, some as high as 100 MPH, according to the National Weather Service’s Louisville office.

“It was a total loss,” said owner Adam Chunglo.

Chunglo said the storm damaged a horse barn, blowing the front doors inside the barn and the rear doors completely off the building.