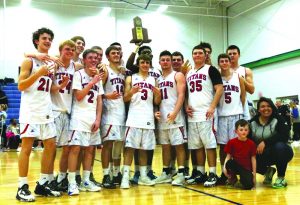 Through three quarters, it looked like the West Jessamine Colts (15-15) were going to take home the 46th district title until a furious comeback by the Mercer County Titans led by juniors Trevon Faulkner and Gunnar Gillis prevented that from happening.

The Titans won the game 59-56 after erasing a 12-point deficit to start the 4th quarter.

Coach Kurt Young told his team at halftime that they didn’t need to panic and if they played the way that they’re capable of, the points would eventually add up.

“I told them basically that we were in good shape and that we hadn’t played our game yet,” said Young, “we knew that it was going to be a battle and we just had to withstand their runs and our guys did a great job of doing that.”