The Mercer Chamber of Commerce held its annual awards dinner Thursday, Feb. 23, at the Stable to honor individuals and businesses for their contributions to the community.

Normally held in the fall, past president April Ellis noted the event had several new aspects, including a “…new time of year, new location and new way of registering. The Chamber is always changing and adapting to better serve its members.”

Executive Director Jill Cutler reviewed the many activities of the organization, spotlighting some of the new projects which included the Scholarship Shoppe, Big Spring Clean Up grant, Better Business Burea accreditation and the partnership with the Campbellsville University Conover Education Center.

The award recipients were:

• Beautification Award was presented to Rosewood.

• Business of the Year award was given to Economic Alliance of Kentucky.

• Festival of the Year Award was won by the Old Fort Harrod Settlement and Raid.

• Chris King was named the Jane Coomes Teacher of the Year.

• Ruth Ann Bryant received the Volunteer of the Year award.

• The Young Farmer of the Year was awarded to Josh Hazelwood.

• Camp Horsin’ Around was name the Non-Profit of the Year. 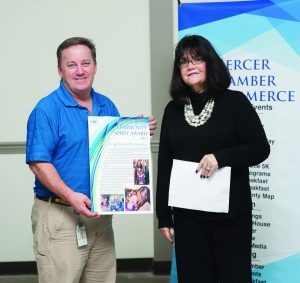 Brad Logan, left, accepts the Bob Martin Community Spirit Award on behalf of the Kendyl and Friends Playground, from board member Teresa Noel at the Mercer Chamber of Commerce Awards Dinner Thursday evening. 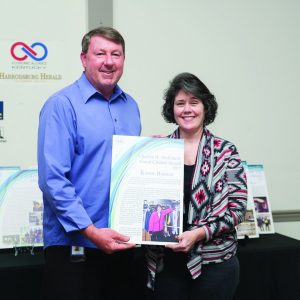