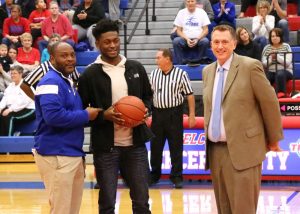 It has been a dream season for Mercer County’s junior guard Trevon Faulkner who recently became the school’s all-time leading scorer and the first Titan to reach the milestone of 2000 points. Heading into district play, Faulkner tallied 2, 032 points and doesn’t look to be slowing down with postseason play beginning this week.

Faulkner has shown tremendous growth since playing varsity as an 8th grader and colleges have started to take notice. His scoring, rebounds, assists and free-throw percentage have increased every season.

Faulkner hopes to lead his team back to the Sweet 16 where they lost to eventual state-champion Dunbar in the first round last season.