The Kentucky High School Athletic Association (KHSAA) honored coaches from across the Commonwealth over the weekend. Mercer County Senior High first year track coach Terry Yeast was named not only the 2A track coach of the year, but the overall coach as well.

Before Yeast can even take a moment to be interviewed about his accomplishments, two of his runners stop him to complain about the day’s practice. However, both complained with smiles on their faces.

“This is the most fun I’ve had in 20 years as a coach,” said Yeast. “I’ve never had a group of kids who loved each other and believed in each other like they have.” 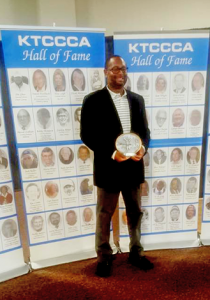 Mercer County Senior High track coach, Terry Yeast, was named Coach of the Year by the KHSAA over the weekend.