If only one word could be used to describe Monday’s win, it would have to be physical. In the first half Mercer was in the bonus, in the second half both teams were in the double bonus and each team had players foul out. Fans were yelling, coaches were yelling, players took and dished out hard hits and Mercer’s Seygan Robins had to leave the game to be treated for a gash over her eye. 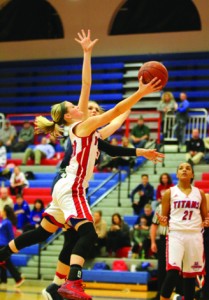