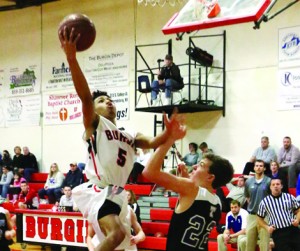 Micha Dunn elevates for the basket in the Bulldog’s 61-55 win over Whitesville Academy Friday, Dec. 30.

After starting the season 0-6, the Burgin boy’s basketball team rode the hot hands of Micha Dunn and Wesley Tyler to their third consecutive win in as many games over Trinity of Whitesville on Friday, Dec. 30

As well as the game ended for the Bulldogs, it couldn’t have began much worse. The Raiders out scored Burgin 22-7 in the opening quarter.

“I don’t know if it’s the whole reason, but I’m going to blame it on us not playing a game since the 17th,” said Burgin Boy’s Head Coach Don Irvine. “They (Trinity) were beating us for every lose ball, they were killing us on the boards, we showed no aggressiveness and we are too tiny and not skilled enough to do that. I had a one sided talk about those things after the first quarter. I don’t know if that helped or not, but I thought if we would get a little more aggressive, get to the foul line and score with the clock stopped, then we would be okay.”