After years of building a successful program, Coach Chris Souder’s Lady Titans were invited to one of the nation’s premier basketball tournaments, the Nike Tournament of Champions held in Phoenix, Ariz. What was supposed to be an opportunity for the team to showcase their hard work and talent, instead turned into a crash course on how to deal with cancelled flights and ruined travel plans.

The Lady Titans arrived at the Cincinnati/Northern Kentucky International Airport at 4 a.m. Sunday morning. Upon arrival,  they learned their gate had changed. Not a problem. Then there was a delay due to staffing and pilot issues. Still not a problem. Then the announcement came that the flight was canceled. That was a problem… 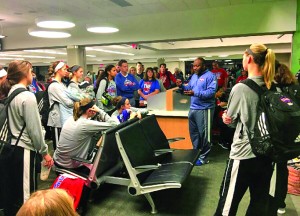 MCSH Athletic Director Donald Smith leads a devotional with the Lady Titans players, coaches and their families Sunday morning when they arrived at the airport before they learned of the flight complications.

To learn more, check out this week’s edition to The Harrodsburg Herald.