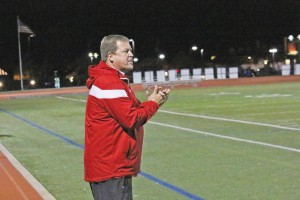 Mercer County soccer coach Garrett Stark was selected as the Central Kentucky Soccer Officials Coach of the Year after leading the Titans to a 12th Region Title in 2016.

“I am blessed to have coached such great young men my four years at Mercer County. I have also been blessed to have had two great assistant coaches in Doug McClain and Aaron Steele that go above and beyond to help prepare our players week in and week out. I have been blessed to have had a great school administration and community supporting our Mercer County Boys Soccer program. The parents have truly been great at raising really good young men off the field and that has helped in their development as soccer players on the field over the years,” said Stark.