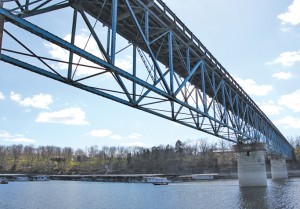 Right-of-way issues are slowing down construction of a replacement for the 92-year-old Kennedy Mill Bridge to a crawl, local residents say.

Bidding for the construction of a replacement bridge across Herrington Lake has been moved to next year.

The project to replace the Kennedy Mill Bridge, which connects Mercer and Garrard Counties, has been postponed until January 2017, according to Natasha F. Lacy, public information officer with the Kentucky Transportation Cabinet Department of Highways District 7.

Lacy said the hold up is right of way issues. “The date will be reassessed next month based on the progress of the right of way negotiations,” she said.

This marks the third time the department of transportation has delayed bidding out construction. It was originally scheduled for April.

The postponement is not good news to the commuters and business owners who rely on the 92-year-old bridge.

Pick up a copy of the Harrodsburg Herald or subscribe to our online edition for the rest of the story.