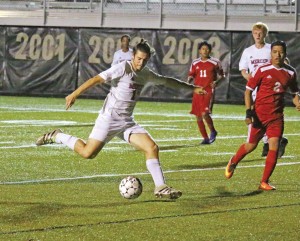 Brandon Ballard and Cody Shackelford each netted hat tricks for the Mercer County Titans soccer team Tuesday night as they cruised to a 7-1 win over Wayne County in the first round of the 12th Region Tournament.

After the game was delayed by 12 minutes because of Wayne County’s late arrival, it didn’t take long for the Titans to get on the board. Ballard scored his first goal just two minutes into the game off an assist from Shackelford.

“We had a little delay starting the game, but we came out pretty well,” said Mercer County Head Coach Garrett Stark.

Just three minutes after his first goal, Ballard scored his second of the night, giving Mercer County a 2-0 lead.

Five minutes later, Shackelford got his name into the scoring column, before putting his second goal of the game just minutes later.

“We came out and played pretty well in the beginning and got a lot of shots. We attacked pretty good and got several corner kicks in the first half and able to score off some of them, but obviously we missed a lot of shots tonight too.”