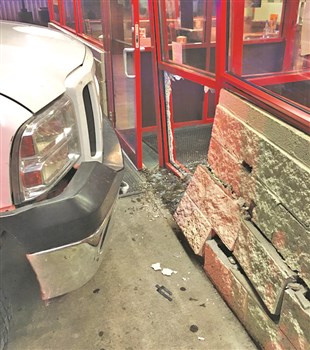 Justin Deaton, 18, of Salvisa, lost control of his truck, striking one youth and pinning another between a parked truck and the Huddle House Wall Sunday night.Robert Moore 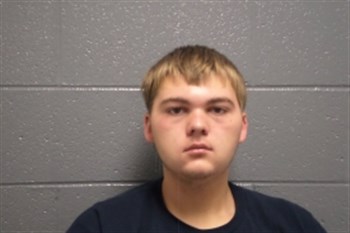 Justin Deaton, 18, of Harrodsburg, has been charged with leaving the scene of an accident, among other charges. He is being held on a $30,000 bond.

Two Harrodsburg youths were injured and a Salvisa man faces criminal charges after an accident at Huddle House on Sunday.

Deaton hit a parked 1999 Ford F250, which smashed into the restaurant, pinning Christian Scott Derossett, 21, of Harrodsburg, between the truck and the wall.

Derossett was transported to Ephraim McDowell Regional Medical Center in Danville for treatment. His condition has not been made available to the public.

Deaton’s truck bounced off the Ford and struck a 17-year-old Harrodsburg boy, knocking him down. He was treated for minor injuries by Mercer County EMS and released.

The driver of the parked Ford, Dakota Moore, was still sitting in the truck at the time of the accident. He was not injured, according to authorities. Both Deaton and a passenger riding in his truck also escaped injury.

Deaton fled before police arrived on the scene. However, his passenger, Jerrod D. Anderson, 18, of Salvisa, remained on the scene, telling police the driver was intoxicated. According to the arrest report, Anderson asked Deaton several times to let him out of the truck before the crash.

Deaton turned himself into the Harrodsburg Police Department on Tuesday, Aug. 30, at 10:25 p.m. He was charged with three felonies—2nd-degree assault, 1st-degree wanton endangerment and 1st-degree criminal mischief—and two class A misdemeanors—4th-degree assault and leaving the scene of an accident. Deaton is being held at Boyle County Detention Center on a $30,000 bond.

Huddle House has been shut down since the accident. It will be nearly three weeks before it reopens, said area manager Susan Crumback.

Pick up a copy of this week’s Harrodsburg Herald or subscribe to our online edition for the rest of the story.