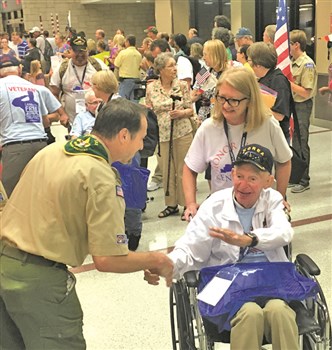 “It just amazes me that after so many years, so many people turned out,” said Earl K. Sherrow of the Honor Flight he took to Washington, D.C., this weekend. “It made me feel like somebody.”

“It just amazes me that after so many years, so many people turned out,” said Earl K. Sherrow, 85, of Harrodsburg. “It made me feel like somebody.”

Sherrow was talking about the Honor Flight to Washington, D.C. he took this weekend. He was one of 43  Kentucky veterans from World War II, the Korean War or the Vietnam War who were given a one-day tour of Washington’s war memorials on Saturday, Aug. 27.

Sherrow served as machine gunner in the U.S. Army. He was one of the Wolfhounds, a member of Company C of the 27th Regiment, part of the 25th Division.

“I was the smallest person in the company and I had the heaviest equipment,” he recalled. “I don’t know if they thought I’d make the smallest target or not.” 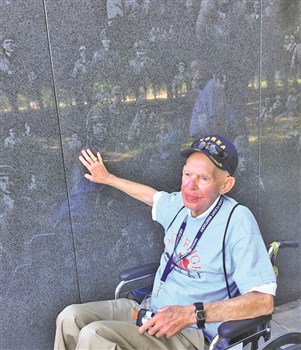 Earl Sherrow said one of the most moving parts of his Honor Flight was his visit to the Korean War Memorial in Washington, D.C. 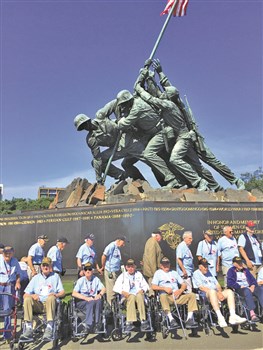 Earl Sherrow, center, was one of 43 Kentucky veterans who traveled to the nation’s capital, where they got to see the U.S. Marines Memorial.